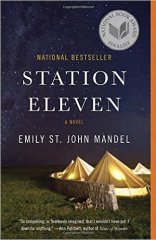 can ruin you for his genre, which I can only and insufficiently describe as scifi-fantasy-thriller-postmoderism (but not really any of those). In fact, The Bone Clocks might ruin you for just about any contemporary fiction genre, and if it doesn’t, the remarkable and astonishing Cloud Atlas certainly will.

That being said, Station Eleven by Emily St. John Mandel deserves its place on this shelf, and the many awards it has won. Her story is not as long as Clocks or Atlas, nor the writing quite as gripping or the characters quite as entrapping, yet each chapter in the book is a delight and the thing in its whole, at least for me, was a great read and well worth the time. This is sophisticated stuff, entertaining, vivid, frightening, provocative, and hopeful. I look forward to her next.